The best free things to do in Kuala Lumpur

Malaysia’s capital city, Kuala Lumpur, has tons of things to see and do. From botanical gardens to museums, there’s plenty to keep you mind boggled for a few days. However, if you try to tick off everything that Kuala Lumpur has to offer, your bank balance is going to take a hit. So, continue reading for 6 things to do in Kuala Lumpur that are completely FREE.

Arriving into Kuala Lumpur from Penang, you will instantly notice that the buildings drastically change from crumbling walls to high-rise buildings. Petronas Towers are an iconic image of Malaysia and stand at a whopping 375 meters (1,230 feet) tall, you will find it near impossible to visit Kuala Lumpur without getting a slight glimpse of the twins. Whilst the towers can be seen from multiple points around the city, the best views are without a doubt from KLCC Park. The best bit… the park is free to enter. So, put away your purse and hold back from splashing out on those viewpoints in hotels and overpriced cafes.

KLCC Park is the perfect place to wander around. Not only is the 50 acres of land tranquil, there’s even a manmade lake, known as Lake Symphony, with a fountain that hosts daily water shows at noon and throughout different intervals in the evening. As you stroll through the park you will find up to 5 viewpoints that are signposted with the best views of the towers. Whilst they are awesome, there are also many more. It’s just a case of walking around the park and seeking them out yourself. If you’re short on time, try to go to the park one hour before sunset, that way you’ll get the best of both worlds; views of the towers in the day time and views of the towers during night time. You can arrive at KLCC Park as early as 7am when the gates open, and leave as late as 10 pm when the gates close.

Located on Petaling Street is the lively and colorful Chinatown. The shops are open as early as 10 am but the market stalls start to set up in the late afternoon and open until late in the evening. The street is famous for its bustling market stalls selling everything from clothes, sunglasses, watches and electronics. All sorts of goods are being sold on either side of you by mostly Chinese vendors. Whilst the Chinese lantern filled street is a fun place to walk through and completely free to visit, there may be temptations to dig into your wallet and splash the cash on the cheap goods.

Pro tip: haggling is a way of life in Kuala Lumpur, so make sure you give it a go and get yourself a good deal. A discount of anything between 20 – 25% off the original starting price is considered fair.

Head over to Brickfields District of Kuala Lumpur, for a taste of Indian culture, cuisine and shopping. Located just a short walk away from KL Sentral monorail, Little India is totally worth the visit. A vibrant community of Indians, Bangladeshis and Sri Lankans, have lived in this district for generations and thus brought their traditions and culture to the area.

The main street in the neighborhood is Jalan Tun Sambanthan. Here you will find shops upon shops selling traditional saris, jewelry and spices. The street is bursting with color and aromatic smells of Indian food. Even if you don’t plan on buying any souvenirs or colorful sparkling saris, Little India is a great place to tuck into some delicious food and get a taste of another culture and way of life. You will feel like you have been transported to India within minutes after stepping off the monorail.

Merdeka Square, also known as Independence Square, is famous for being the place where Malaysia claimed its independence and the national flag was raised on 31st August 1957. The Malaysian flag now waves proudly on the tallest flagpole in the world at 95 meters (311.68 feet). Whilst at Merdeka Square, take some time to admire the architectural wonder that is Abdul Samad Building. It’s hard to miss with its distinguishing design and beautiful brick work. Aside from its beauty, the building also has a historical significance. It was originally built in 1897 to house the offices of the British colonial administration, and was later used to house the office of the Ministry of Information, Communications and Culture of Malaysia.

After marveling at the Abdul Samad Building, take the time to wander around the back of it. Here you will find Masjid Jamek, one of the oldest mosques in Kuala Lumpur. The mosque used to be Kuala Lumpur’s national mosque until the opening of Masjid Negara in 1965. Although the mosque dates back to 1909, looking on the outside, you would think this mosque is fairly new with its grand design and shiny white flooring.

If you’re curious about the new National Mosque, head over to Masjid Negara. The intriguing design of the mosque is what attracts international visitors; those that practice Islam and those who do not, still flock to see this unique structure. Part of the modern, contemporary design is the 73-meter-high minaret accompanied by a 16-pointed star concrete roof, which is a far cry from the traditional dome tops. As the mosque is set in 13 acres of beautiful gardens, surrounded by reflecting pools and fountains, you could easily spend a few hours here. Just remember, that the mosque is closed to non-Muslims during prayer hours. You can find more information about the mosque and the opening times here.

Bukit Bintang is well-known for its trendy and upmarket malls, boutique shops, coffee shops, night-clubs and massage parlors that line the streets. It’s a paradise for many tourists and the youth of Kuala Lumpur alike. However, when the sun goes down, the popular and chaotic Jalan Alor Street is the place to be. Unlike the fanciness of the rest of Bukit Bintang, this corner of Bukit Bintang is all about cheap eats on the streets. There’s not much happening in the daytime here but once dinner hour strikes, this foodie central street comes alive. Inexpensive seafood restaurants and some of Malaysia’s finest culinary delights found at the food carts open for the evening. It could take quite a few visits to try everything, but if you’re looking for a quick recommendation, wrap your tongue around a Nasi Lemak, a popular local rice dish cooked with coconut milk.

So, there you have it. 6 free things to do in Kuala Lumpur before you go splashing the cash on its paid attractions. Whilst the paid attractions may be cool to see, it’s better for you to see the free things first and then do the paid activities after. Afterall, marveling at the Petronas Towers, experiencing other cultures at Chinatown and Little India and admiring the mosques seem so much better when they don’t cost a penny.

Getting from Ao Nang to Phuket: A guest review

5 international cities to visit from Bangkok without flying

All you need to know before your first visit to Vietnam

Getting from Manila to Banaue: A guest review 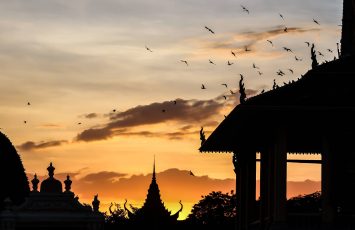 Top 5 things to do in Phnom Penh after sunset