The best things to do in Dubrovnik – a city guide

Destinations The best things to do in Dubrovnik – a city guide

The gem of the Dalmatian coast, in an area of the Mediterranean crammed with an endless list of picture-perfect seaside towns, Dubrovnik has been right at the top of many people’s travel bucket list for the last couple of decades.

With the explosion in popularity of the hit series Game of Thrones, which was partly filmed within its walls, this coastal beauty has only grown in stature. So, with the ‘Pearl of the Adriatic’ firmly on your must-visit ticket, where do you start exploring? Let’s count down the ten best things to do in Dubrovnik, Croatia.

No Dubrovnik itinerary would be complete without at least one loop of the Dubrovnik City Walls. At around 2km in length, it’s definitely not the most taxing of activities, but with the beating Adriatic sun on your shoulders, it’s best to get onto this attraction as soon as they open at 8.00am to avoid both the heat, and the crowds.

The Old City Walls provide you with some of the best views of Dubrovnik: the famous red-tiled roofs, up to the imposing Srd Hill and back out to the Adriatic Sea and Lokrum Island. Not to mention that the walls are one of the first Game of Thrones ‘sites’ that you’ll visit as you tour the city.

Tickets to visit the city walls cost 200 KN per person, so around 30 USD.

2. Take the Game of Thrones tour

And to continue that Game of Thrones theme, you really can’t head to Dubrovnik and not take a tour of the key filming locations (especially if you’re an avid fan of the show). But, just in case you aren’t fully up to speed on GoT, Dubrovnik was the original filming location for much of King’s Landing.

So, if you’re wanting to visit the Red Keep, see the streets where Cersei was forced to do the Walk of Shame or even check out Blackwater Bay, then you’ll need to get yourself on one of the many tours offered by locals. They’re a fascinating insight into how the show was made…

One of the landmarks of Dubrovnik, Lovrijenac Fort, or as it’s often called, Dubrovnik’s Gibraltar sits just outside the old city walls, and was built at some point in the 11th century (well official records show that there was a Commander of the Fort appointed in 1301, but it was constructed some time before that).

The Fortress was originally built to protect Dubrovnik from Venetian invasion. And, as far as the legend goes, the people of Dubrovnik got wind of a plan by the Venetians to build a fort in the same spot. But they managed to construct it so quickly that by the time the Venetians arrived with supplies to build their own, Lovrijenac Fort was already standing, leaving nothing but the option for the Venetians to turn their supply ships around and head back home.

Cost for entry into Fort Lovrijenac is 50 Croatian Kuna or about USD 7.50.

It may be a little bit of a cheat, but with so many incredible attractions within the Old Town, you can craft your own mini walking tour, a quick jaunt of the top city sights. A few places not to be missed are:

After all that pavement plodding, you may well need a bit of well-deserved rest and relaxation. And there is no better beach to do that on than in Dubrovnik at the beguiling Banje Beach.

With views back towards the Old Town harbour, and across the bright blue waters to Lokrum Island, Banje Beach is a rather idyllic setting. But, with it being so close to Ploce Gate it’s possibly also the most popular, so make sure you get down there, lay down your towel and grab your spot early.

6. Go kayaking from the coast

That crystal clear Adriatic ocean awaits, and is one of the best ways to see this sensational city from a unique angle. Leave the hustle and bustle of the crowded alleys behind you, and book a sea kayaking tour, to see Dubrovnik from the gently lapping waves.

If a peaceful paddle around the city walls, exploring hidden caves and even crossing out to Lokrum Island sounds like your cup of tea, then a Sea Kayaking Tour should be on your list of the best things to do in Dubrovnik.

Even if kayaking isn’t your game, Lokrum Island is still an absolute must-visit location when in Dubrovnik. The island is only a few hundred meters off the coast, and with lots of local ferries out to the island, is a very easy trip to make.

From being home to a Benedictine Monastery to the summer palace of Austrian royalty, the island offers plenty to explore. What’s more there are beautiful botanical gardens and even proudly strutting peacocks to see on this island.

Just in case you haven’t already scheduled in a bit of island-hopping around the dazzling Croatian islands such as Korcula, Hvar and Brac, then give yourself a special day trip out of Dubrovnik instead.

The Elaphiti Islands of Koločep, Šipan and Lopud are strikingly stunning Adriatic islands and can handily all be toured on a day trip from Dubrovnik. Here you’ll swap those copper-colored villages for lush, forested islets, with two of the islands entirely car-free, so offering a more laidback, relaxed way of life.

Want to catch the most spectacular sunset in Dubrovnik? Offering the best views of the city, head up the Dubrovnik Cable Car to the top of Srd Mountain (or Srd Hill). Here you’ll get jaw-dropping panoramic vistas of the city and the Adriatic Islands.

As an added bonus you can visit the Imperial Fort, which nowadays houses the Homeland War Museum, boasting an extensive exhibition on the Siege of Dubrovnik that befell the city in the 1990s.

And what better way to wrap up this to things to do in Dubrovnik list, than the ultimate spot to wind down and embrace the night ahead?

Make your way to Buza Bar, a small hole in the wall, hidden gem of a bar, with those sweeping views over the Adriatic that you’ve almost come to expect. Rub shoulders with locals as you suck down a simple drink (or two), perched somewhat precariously on the cliff as twilight descends.

Regardless of what you decide to do in Dubrovnik, you’ll be spoilt for choice in this slice of Mediterranean paradise. From wandering the walls, to island-hopping, sea kayaking and stunning sunset views, this treasure of a town offers so much that your biggest problem will be finding enough time to see it all, before you swing on your backpack and head back on home.

Traveling alone? Not if you bring your smartphone

From Hanoi to Ho Chi Minh City: The beach or the mountain way?

Things to do in Koh Phangan that don’t involve partying 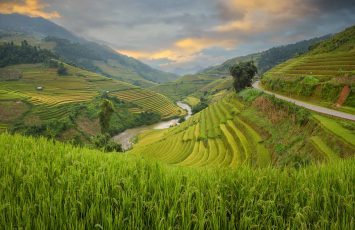 A history-fueled, eye-opening trip from Kanchanaburi to Bangkok: A guest review