Untold Wanderlust in Thailand – A second date with Bangkok

Our first trip to Thailand was in 2016. 3 years later, we’re coming back to visit an old flame. Post-Thailand, we’ve traveled extensively across Asia, large areas of Europe, and parts of Africa. For a dose of nostalgia, we will revisit some of the places where we were bitten by the travel bug and infected with wanderlust. Join us to find out how Thailand has changed, the disparities we notice as more experienced backpackers and the extent in which we go to a bargain.

Touch down at Bangkok Suvarnabhumi Airport

We touched down in Thailand early Friday evening and brisked our way to the immigration desk faster than anybody else on our flight. We hoped to beat the crowds and slide straight through passport control with our stamps, but our brains forgot to remind us that we’re in one of the busiest airports in all Southeast Asia. We arrived at immigration to flocks of holidaymakers, equally as eager to exit and enjoy the entertainment, eateries, environment and ecstasy of all else beginning with E.

We thought we were sooo smart ordering a Grab car (Southeast Asia’s equivalent to Uber) as we watched other tourists hail down pink taxis for double the price to the city. It wasn’t until we met an Irish couple that took a bus from the airport, straight to Khao San Road for 50 Baht per person did we realize our first mistake upon our return to Thailand. Not so much a failure, more a missed opportunity to save money. Failing that, it would of been easier to book transport from the airport to Khao San Road online.

Opting for the freeway for an extra 25 Baht to our fare got us to our hotel much quicker. By this time, it was 11pm. We spent at least an hour in the immigration queue. Adding to that, our flight was delayed by an hour, making our arrival much later than initially expected. Our hotel was strategically booked near the infamous Khao San Road; close enough to party central, but far away enough to escape the noise of EDM music in the early hours of the morning. The location of the hotel (Amarin Inn) is ideal for couples who like to retreat for peace and quiet at the end of the night but also be in close proximity to the hustle and bustle of Khao San Road to meet other travelers. Considering our jet lag and enthusiasm to reminisce, we headed straight out in search of a local Chang beer.

For those who don’t know Khao San Road, it’s the backpacker paradise of Bangkok. It goes as far as the eye can see, littered with restaurants, street-food stalls and cheap beer on both sides. When the sun goes down the lights turn on, transforming into a vibrant pedestrian highway not to be missed by people who love to party.

Khao San Road was identical today as it was on our first visit 3 years ago. We recalled the layout of the surrounding streets and the quiet alleyways to cut through. The sound of ping pong balls popping, and the whisper of ‘massage’ clogged our ears. The sight of tailors touting and tourists twerking caught our eye. The smell of pad Thai frying and the fresh warm air of Thailand filled our lungs. It was like we only left last week! Despite being a couple, and clearly not the target audience, we were still constantly approached by touts trying to get us to watch a ping pong show.

We noticed some distinct differences from our first visit in 2016. Prices of food and drink in bars and restaurants have increased, notably on beer from around 80 Baht to 100 Baht for a large bottle of Chang. Promotional staff oversaturate the sidewalk, waving flyers advertising laughing gas, something that has clearly grown in popularity amongst tourists since 2016. As opposed to last time, Katie felt more at ease trying new foods in replacement of turning her nose up at everything in the menu that wasn’t chicken breast with rice. This time around she sampled Panang curry, Thai crepes and pineapple rice. So adventurous!

We spent an hour or two people-watching and making other random observations. For example, we saw more families with young kids here than anywhere we have been in SEA. We overheard many different languages in passing, most commonly Spanish, which we found interesting since don’t meet many Spanish whilst on our travels.

Over the course of the next few days in Bangkok, we frequented the same restaurant for food and the same bar for drinks. When we find somewhere we like, we stick to it for comfort and reliability. We mostly hung out adjacent to Khao San Road; Khao San road’s little brother “Little Khao San” officially “Soi Rambuttri.” This road is perfect for couples to meet other couples, as the atmosphere is much more relaxed and quieter, allowing you to chat away about your travels, as opposed to Khao San Road that is filled with banging music and solo travellers chugging spirits by the bucket.

When it comes to getting around town, tuk-tuks are easily accessible and often affordable if you can haggle it down. Tuk-tuks are the perfect mode of transport for couples, as you get to split the cost with each other, as opposed to having to pay the full fare by yourself. What some tourists might not realize, is that public transport in Bangkok is very well-connected to nearby hot-spots; whether that be a floating market, a temple (wat) or museum. We decided to tick-off some more temples we hadn’t visited the first time around. It was a shock to us arriving to Wat Benchamabophit and Wat Prayurawomgsarat, realizing we had already been before! Apart from the temples visited by most holidaymakers, we like to venture out far and wide. Off the beaten path and beyond the pages of the paper maps designed for tourists. For us, it gets to a point when most temples start to look the same, apart from a particular ‘pink dragon temple,’ which took up most of a day to visit. The 45km commute was well worth the moment of seeing the beastly dragon scaling the pink tower; an unusual design for a Buddhist temple.

Moving on from Bangkok to the next exciting stop

Waking up at 11am each morning recovering from jet-lag, meant the days passed quickly, and before we knew it, our 4-night stint in Bangkok was almost over. We plan to move on from Thailand’s capital in search of a romantic setting surrounded by sea and sand; ISLANDS!

Koh Phangan was our favourite island on our first visit because we shared so many pleasant and random memories. So we went online to reserve our bus and ferry tickets from Bangkok to Koh Phangan. We hope on our return, we can repeat most of those awesome moments, such as relaxing by the pool, a stone’s throw away from the beach. Scouting the market stalls for new dishes and chugging every possible flavor combination of fruit shake. And of course, cruising around on a scooter with the wind in our hair, buzzing down dirt roads and getting lost in the process.

In retrospect, our second time in Bangkok was an eye-opener to what has changed since 2016; increase in prices and a lot more balloons on sale. However, a lot hasn’t changed. It remains an intriguing place to discover Thai culture and nightlife. A vibrant part of the world that we predict will stay relatively the same for years to come.

How to make your bus journey more eco-friendly

Bookaway’s updates on the Coronavirus (COVID-19) She took the midnight train goin’ anywhere – Hanoi to Sapa: A guest review

The overnight bus from Krabi to Bangkok: A guest review 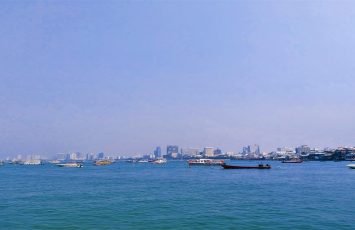 A quick ride to the City of Love – Bangkok to Pattaya: A guest review 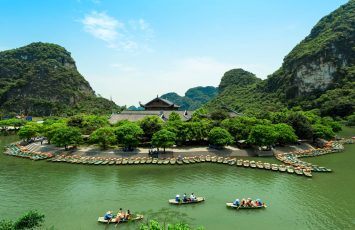 How to Spend 24 Hours in Beautiful Ninh Binh