A night ride to the City of Angels – Pattaya to Bangkok: A guest review

Blog Route reviews A night ride to the City of Angels – Pattaya to Bangkok: A guest review

Traipsing along Pattaya’s Bali Hai Pier against a loud, touristy crowd, I was wondering why these guys are invariably traveling in large groups.

I mean, what’s the point of walking behind some tour guide flying a flag? To me, there’s nothing like independent travel – the only way to get a sense of place.

I’d just come back from Koh Larn, a fab island next to Pattaya, and was now on my way to the City of Angels.

I’d booked this trip from Pattaya to Bangkok online and chose Bell Travel’s coach, because $11.77 was a bargain and the operator has good reviews.

Grateful for being able to head to Bangkok without a tour guide, I walked to Balihai Bay Hotel, the agreed pick-up point.

Expecting Bell Travel to collect me at Balihai Bay Hotel at 6:00 pm, I suddenly became uneasy, even though it was only 5:45 pm. The small voice within me told me to give them a ring, just to make sure they are coming. This was not a bus station after all, and I couldn’t see any other peeps waiting here.

“Sir, you can wait at the reception,” said one of their employees in a firm but friendly tone. This Thai woman on the other end of the line spoke acceptable English, and she assured me the staff was on their way.

Balihai Bay Hotel’s security guy, however, wasn’t so accommodating. Keen to demonstrate his superiority, he said I couldn’t go to the reception because I wasn’t staying at the hotel.

Guys, give this bloke a gold medal, I thought to myself, took a seat on the wall near the hotel’s car park, and watched motorbikes whirring past and cars zooming by. Grateful that I didn’t need to work here all day, breathing polluted, humid air, I slurped a guava juice that I’d bought at 7-ELEVEN, and looked forward to my bus trip to Bangkok.

The dark-blue tee with the orange collar was a relieving sight; I instantly recognized Bell Travel’s uniform. It was 6:15 pm when the guy arrived on foot. This chap walked me to an empty minivan, but I knew he’d surely pick up some more customers on the way to the bus station.

Criss-crossing around Pattaya, collecting fellow-travelers, I watched the bright lights and the city coming to life. Techno beats blasted from glittering go-go bars, half-naked beauties beckoned to singlet-wearing, beer-bellied men in their 50s, and Indian lads drummed up business in front of their restaurants.

I was pleased to be heading elsewhere, because nightlife is no longer my cup of tea spiked with fruit schnapps. It was 6:50 pm when we arrived at the bus station, and Bell Travel’s coach was ready to leave.

I climbed the 30-seater that had a restroom in the back of the near-full bus, and was welcomed by a mainly German crowd. Those guys in their 50s were fooling around, pulling each other’s legs, laughing. One of them was sipping his Leo beer, cackling cockily, and a darkly-tanned, mature woman decided it was a great idea to eat an onion salad on the bus. I was lucky enough to have got the seat right in front of her.

The wonderful scent of a lot of fresh onions did not stop me from looking forward to the ride though; this was going to be a cozy trip. There were comfy, reclinable seats, and since there was nobody sitting in front of me, legroom wars were not going to ensue – at least not with me being the victim.

There was a short, light chatter when the bus driver started the ignition at 7:00 pm on the dot, according to the schedule. He idled for a couple of seconds, then pulled out of the driveway.

Studying the interior, I saw that there was a gogglebox, though nobody had bothered to turn it on. I reckon the guys do that only on longer journeys but not on such a short, barely two-hour ride to Bangkok.

The air conditioning was working properly. According to the display, it was 29 degrees Celsius outside and 15 degrees inside. It didn’t feel that cold though; I was fine wearing only a tee. If the air flow had bothered me, I could’ve easily closed the flap above me.

We had scarcely left when the lights went off, and this must’ve had a soothing effect on everybody; it became quiet instantly. I rejoiced in the cozy, humid-free temperature and enjoyed the magic silence, reclined my comfy seat, and ignored the low murmurs behind me.

Watching the darkness roll past, I soon figured that there wasn’t much to see along the journey apart from huge ads, and could hardly keep my eyes open. The smooth ride coupled with the lack of light made me dead to the world; I soon drifted off to never-never-land.

It wasn’t until we approached Suvarnabhumi Airport at 8:40 pm that I woke up. “Warum hasse ich es immer, diesen Flughafen zu sehen?” (Why do I always hate to see this airport?) sighed a German that was clearly heading for home, back to his real world where it was winter. I knew exactly how he felt; I’d been there myself and was relieved to be an expat that didn’t have to fly back.

Watching Suvarnabhumi’s bright blue lights lighting up the night, safe in the knowledge that Bangkok’s angels couldn’t be far, I looked forward to more wonderful journeys in my dreamland of smiles.

I’m Philipp Meier – Freelance Travel and Content Writer, English / German Translator. I have a passion for Thai culture and traveling off the well-trodden tourist trail in the Land of Cheeky Smiles. You can find me at Writer Philipp Meier.
My stories

7 reasons to add Hua Hin to your Thailand itinerary 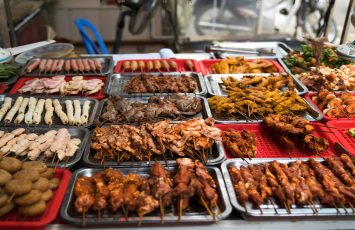 The unique dishes of Sapa: A culinary journey

8 quirks about Thai culture to know before visiting Thailand

Does anxiety stop you from traveling? Here are 5 tips to help you cope

Your guide to the 10 best beaches in Vietnam